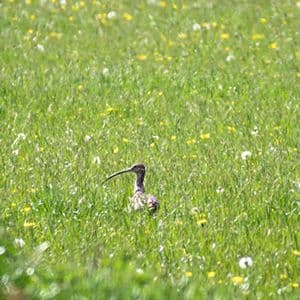 As the snowdrops fade and the daffodils begin to open, other signs of the impending seasons become more apparent. From the first Curlew warbling above us as these beautiful visitors return and the swallows come home to nest, ending their 6000 mile journey.

Arriving at the farm in numbers, the Swallows are followed three weeks later by the Swifts, and once nested and chicks hatched the young Swifts leave the nest and launch themselves off on their very first ever flight! After that they don't return to the nest and are no longer cared for by their parents, they begin their journey and hopefully return year after year.

We all know many of these facts about migratory birds but what is becoming increasingly apparent is habitat loss. Take the Curlew, now back on the red list as endangered but with the UK hosting 30% of all breeding pairs within Europe - we have a problem. Curlews are ground-nesting waders preferring tufted grassland with panoramic views to watch for predators, traditional hay meadows like those here at Gazegill are ideal habitat.

In the late winter, we prepare the meadows with a light dressing of well-rotted compost or as we call it, farmyard manure. This makes excellent camouflage for the nests and it also provides food for the birds.

We often see freshly turned clumps of compost where the Curlew has lifted it to expose the rich blood worms that are lurking beneath. So, with predators and habitat loss you might think the Curlew would evolve to nest above the ground, the problem here is after hatching and a bit of rearing by the male the chicks become runners. Unable to fly, they hunt spiders and other insects whilst they grow. You’ll know if you ever get near to a runner… just look above, you’ll see two angry parents trying to warn you off!

Habitat is critical, Curlews only nest once so if the first nest and eggs are destroyed they won't attempt to nest again that year. Through the intensification of agriculture farming techniques have changed and not always for the better.

More often than not changes to practices are about efficiencies and increased outputs for bigger profits, as everyone around us here at Gazegill moved from hay meadows to silage fields Emma's dad Tony stood his ground and maintained that nature and the wildlife were part of the farm.

Silage is a repetitive process, the fields are often treated to a noxious brew of slurry and very little organic matter like farmyard manure. The cows are housed not on straw beds but rather slatted floors where all the waste drops through and brews into a nasty nitrogen-rich acrid broth.

Slurry application is often followed by a dose of fertiliser (expensive to buy and resource-heavy to produce) and these inputs, in turn, promote rapid grass growth which is then cut as early as the weather permits but often by early May.

Once cut and harvested this cycle begins again, often yielding 3, 4 or 5 cuts a year. The Curlew chicks are rarely running before mid-July so you can imagine the impact on this majestic bird if it nests in a silage field…

Sadly the red list now includes many once-common species like the House Sparrow, the Greenfinch and the Swift. As a matter of fact, 29% of UK birds are now on the red list of concern. With seventy red-listed birds and 9 UK species threatened with global extinction urgent action must now be taken to understand what is causing such drastic declines in numbers. We know that many face habitat challenges like the Curlew but there are many species that we need to further understand so we can help them flourish once more.

By supporting organic farming and food production there is every possible chance we can turn these numbers on their head as organic agriculture is key to returning the countryside and soil to a better place!

Thank you for your support, you are nature's voice.